Here's one from way back. Not an especially well-written or well-structured piece, but of historical interest for the KSR quotes & info. I think this may have been my first piece of writing for Sci-Fi Universe, which at that time (1996) was a print magazine edited by Mark A. Altman and published by Larry Flynt. I've given the piece a new title. 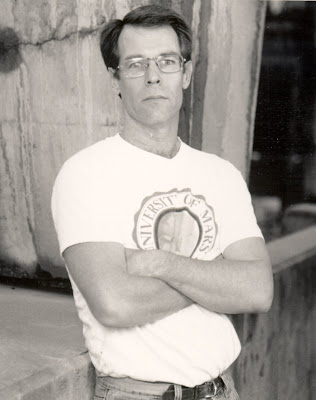 
"It's a near-future science fiction story, a sort-of environmentalist thriller."

Award-winning science fiction author Kim Stanley Robinson is speaking about the
origins and the writing of his next novel, tentatively entitled Antarctica, due
sometime in late 1997.

"I thought that in the next century, given the population problems and the resource depletion, that since there is probably oil down there, and since there are several nations that are not in the Antarctic Treaty that really don't care about environmentalism very much -- they've already done some preliminary investigations down there that are technically illegal--like Pakistan, who are not treaty countries, it would be easy to concoct a plot that's sort of oil research versus radical environmentalism of the Earth First! variety."

While some writers stick to the hackneyed writers' workshop adage of "write what
you know," Robinson has taken a more unique (and occasionally adventurous)
approach with Antarctica, perhaps best summed up in the mantra of "Research what
you write."

"Antarctica's a nice continent to write about, in that you can read five or six
books and have a really solid sense of what's down there," says Robinson. "And I
read those, and had some notions, and was sort of looking around with the idea
of pursuing these notions in my story.

"Then I found out that the National Science Foundation has an 'Artists and
Writers' program where they send you [to Antarctica] and allow you to go where
you want to do your research, as long as you promise to write or photograph
something directly about Antarctica," Robinson explains. "So I promised them a
science fiction novel set down there. They accepted me into the program, and I
went down to Antarctica last November and December.

"It was like another planet. That flight south from New Zealand was the most
amazing thing I've ever done. The interior of these old Hercules prop planes is
all Star Wars-antique looking- they look ridiculously antique, like over-art
directed stage setting at a Spielberg-type studio, all dinged up. You're trapped
inside this vibrating tin can without much of a view out. The plane just came to
a stop and I realized that we must have landed-a very sweet touchdown,
particularly considering that the flaps had frozen shut and weren't operating.

"I ended up spending six weeks down there, basically tagging along with a
variety of scientific teams doing their research in the field — geology,
meteorology, climatology, astronomy, paleontology, all the dinosaur stuff."

Research—whether it be of the primary or secondary variety—has become an
integral element in Robinson's writing during the last decade. While writing the
just-completed epic "Mars" terraforming trilogy (Red Mars, Green Mars and Blue
Mars), Robinson seems to have done everything short of actually visiting the the
red planet itself.

"There are some very evocative stereopticon pictures of the [Martian] surface
taken from the Viking landings," says Robinson. "The first time I got one of
those pairs of photos to resolve [into a 3-D image by unfocusing the eyes], I
was amazed because there was a surface all filled with humps and hollows to the
nearby horizon, which is very close...

"The history of the Martian surface is different from Earth's, because nothing's been worn down by water or plate tectonic movement. It's just an ancient surface that's been hammered by meteors.

"[Then] I went to Meteor Crater with my family down in [Near Flagstaff] Arizona
and that affected me very much, because that is a well-preserved meteor crater
[like those that pock the surface of Mars]."

Robinson also had at his disposal a loose group of Mars experts.

"There's guys at the Smithsonian Institute in the Air and Space Museum who were
involved in mapping with Mars, and there's an expert on terraforming in Britain,
who's basically an amateur scientist, who's done a whole lot of work on it, and
he and a few other writers in Britain were always on call as well," says
Robinson. "This topic was ripe for someone to tell a story about it because the
real science that's been done about it had never been unleashed before. So I was
in a good situation in that regard."

Perhaps most helpful to Robinson was NASA planetologist Christopher McKay.

"Christopher's a very friendly, helpful guy," says Robinson. "I could always
call him up and ask him totally strange questions that a normal person would
never ask-like, 'If you're down in the middle of the Valis Marinaris, can you
see the canyon's walls on both sides because of the curvature?' For him, it was
always very provocative. He's say, 'Oh well, that's very interesting, let's work
on that...'"

During the seven years that Robinson was writing his Mars trilogy, he never
stopped researching.

"It was a sort of a feedback loop [between researching and writing]," he says.
"I learned more, and between the publication of Red Mars and Green Mars, there
were some very important books that came out. McKay himself published a cover
article in Nature on the terraforming of Mars that really transformed that into
a scientifically respectable question.

"It was a heavy routine of reading, researching and writing. It's what I like to
do with my days. It's my work. I spend every day writing, devoting some part of
the day to writing, and once I get in the groove, it's what I like to do.

"It was supposed to be a three-year project, so it basically doubled. But there
was no helping it; I'd taken on a lot more than I'd thought. When I started
writing it, I'd wanted it to be a big novel, a door-stopper, a thousand-page
book. I'd gotten about 200 pages in and they hadn't even arrived on Mars yet! I
talked it over with my wife at that point and some other friends, editors, and
my agent...[and I realized that] 'Well, we're looking at a science fiction
trilogy,' which is something I've always resisted writing."

In fact, Robinson's Mars trilogy was preceded by the "Orange County Trilogy" of
The Gold Coast, Pacific Edge and The Wild Shore. But Robinson argues that though the
Orange County trilogy was a planned trilogy, "It didn't have the usual structure
of a trilogy. There were some recurring types and situations, there were some
recurring harmonic overtones, like a musical chord. It was more like a musical
chord than it a trilogy in a narrative sense. It's three major notes in a
movement that relate to each other in different ways: alternative histories,
alternative futures, all about 50 years in the future, and all taking place in
the same area, Southern California. And that still strikes me as a neat idea,
and one of the few original ideas I've had in terms of structure."

Robinson's self-appraisal in this regard seems a bit harsh...until you remember
that he holds a PhD. in English from the University of California at San Diego,
and is extremely well-versed in approaches to writing modern fiction. Still,
despite being educated in a hotbed of postmodern literary theory that tends to
elevate obtuseness, Robinson has developed a writing style that simultaneously
features easy-to-understand prose and relatively complex hard science, economic
theory and political ideas.

"From my education in the literary tradition, what I liked the most was a
certain clarity of expression," comments Robinson. "The obscurities of certain
modernisms I never appreciated. There's a certain power to clarity of
expression. I think of it as a personal preference, but it also does speak to an
audience that doesn't have to have special training in literature. They don't
have to be English majors.

"I think of [author] Gabriel Garcia Marquez in that regard, because [25 years ago] American novels were very convoluted and difficult and there were people like John Barthes and Vladimir Nabokov talking about the death of literature and the exhaustion of literature and that there were no stories to be told anymore. I think when the translation of One Hundred Years of Solitude hit [in 1973], it just knocked the stuffing out of these guys. It's obvious from Garcia Marquez that you can still tell a story in straightforward language that is incredibly powerful."

It was also at UCSD that Robinson first encountered the Marxist theory that,
coupled with Robinson's ecological concerns, would inform the thematic and
political content of Robinson's work.

"Frederic Jameson was one of my academic advisors in school," says Robinson. "He
comes from a more traditional '50s Sartrean existential Marxism that has to do
with politics and personal freedom. He taught me a lot about political theory,
because that's his angle on literature. He tends to subsume the environment
underneath the notion of a socialist or Marxist government--that if you truly
want to be an environmentalist, you have to end up being a socialist anyway in
order to get there."

Robinson himself is less decided on the issue, and this is a conflict that he
has played out in the Mars Trilogy.

"I've been thinking about utopias for a long time now and looking at the world
that we live in and the discrepancy between the two is fairly acute. So I think
about politics a fair amount, as much as anyone can stand to, but I think the
environmental concern... It's sort of a chicken-and-the-egg argument: Which is
more important? Although it seems that the environment is the real reality that
we have to adjust to, and the political systems that we make up are there to get
us in a right balance with the environment. So I don't think I have the same fix
on it as Jameson does."

Robinson admits that the political viewpoints of the central characters of the
Mars trilogy represent different aspects of himself. Ann and Sax, Robinson
says, are "me wrestling with my own thoughts on the matter. It's very easy for me to
flip-flop back and forth between the Ann and the Sax points of view, because
depending on what I'm focusing on at that moment, I can really believe in one or
the other of them pretty enthusiastically. But this is what makes me a novelist,
rather than a preacher or a philosopher. Incoherence is not an altogether bad
thing in a novelist if you can sort out the strands and express them clearly. It
means you can be even-handed towards characters and let them speak their own
mind.

"And at a certain point, Ann and Sax take on these lives of their own... Working
hard on these books, I could get to a state where it was like taking down
telephone messages and being a medium about it. And I feel that Ann and Sax have
their own integrity at this point. And that's a lovely feeling, and that's part
of what makes novel writing so nice." 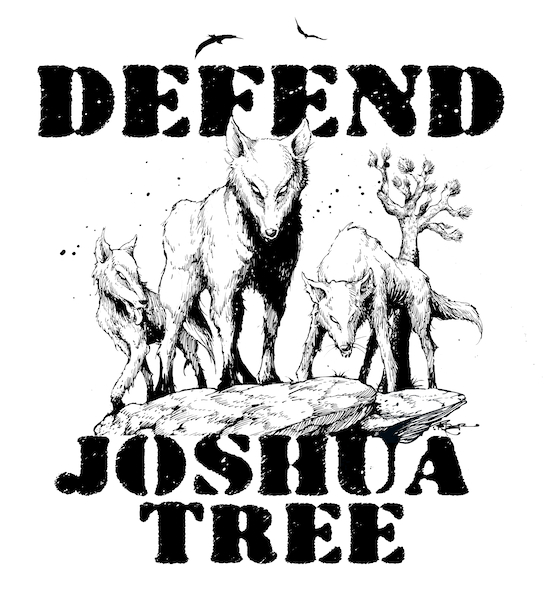 Buy the T-shirt by Arik Roper